“A bad statistic,” says sociologist Joel Best, “is harder to kill than a vampire.”

A well respected journalist who is helping to expose bad statistics as well as many other social issues that plague our Country. So why do I point out this article? The answer is below.

Here is what Hamilton Police Services are saying:

5.)50% of offenders are repeat offenders

“how is it that Hamilton Ontario statistics are so out of “whack” with what Statistics Canada is reporting?”

The answer is to be found in the Police report filed by Cottrill in my own case and it is included in this article.

So what Hamilton Police Services would have us believe is this, that out of 6000 domestic calls annually only 1600 resulted in criminal investigations.

95% of the offenders were male. This translates to the number that 1520 in the criminal investigations were male leaving a remainder of only 80 women who have been violent towards their spouses. I am having a difficult time believing that in all of Hamilton's population there are only 80 cases of abusive women.

Now look at this Police Report in my own personal case. I ask you to make note of 1 extremely important fact that goes a long way in explaining why Hamilton Police Services is able to make the statement that 95% of the offenders were males and it is this:

I was assaulted with with no prior threat or that I was assaulted as a result of the female defending herself. The assaulter admits it and despite the fact that this IS a VIOLENT CRIME Hamilton Police Service officers report this incident as a verbal. This forces us to also ask the question “ How many of those 6000 calls to police were about female against male domestic abuse or violent situations?” 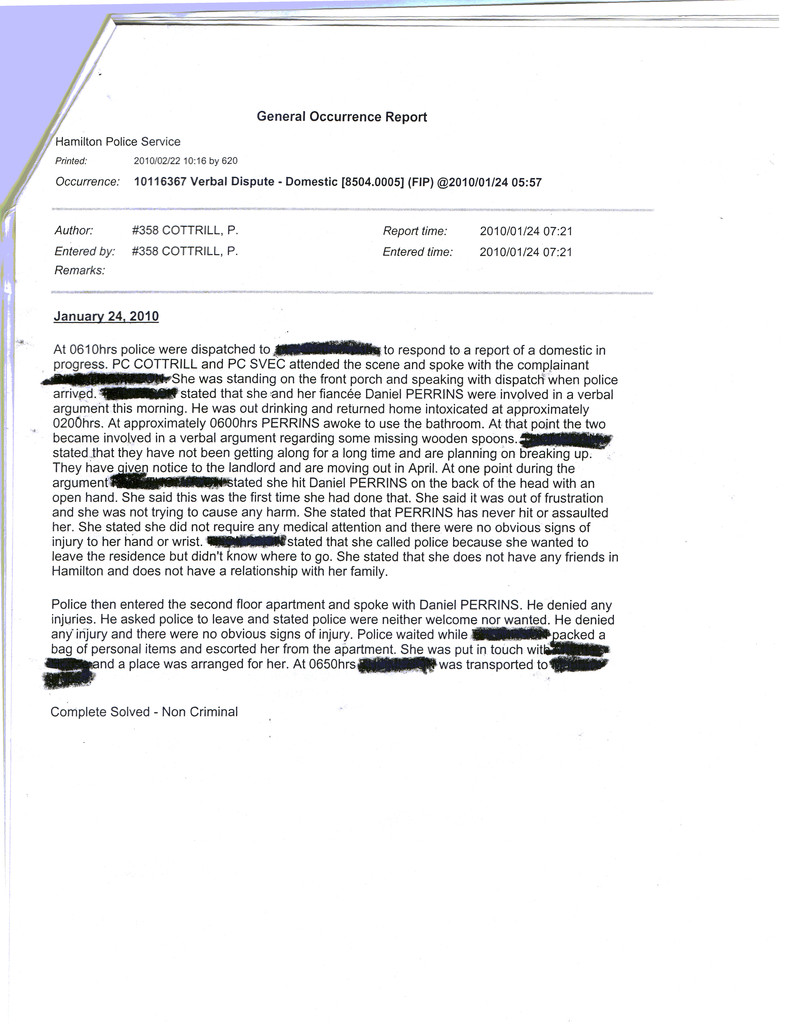 Here is some reports by Statistics Canada that insinuates that Hamilton Domestic issues are in a universe all by itself:

One–year rates of spousal violence from the 1999 General Social Survey indicate that an estimated 220,000

form of spousal violence in the past twelve months. Men and women are exposed to this risk in almost the

• In 2000, police recorded common assault (63%) as the most serious offence for the majority of victims of

spousal violence. A slightly greater proportion of women (63%) were victims of common assault than were

Now lets look at what these numbers seem to point out:

Statistics Canada's data shows that spousal abuse is almost the same with a difference of about 1%-2%.

I fully acknowledge that an assault by a man could create more physical damage. Men typically have a larger body size and tend to be physically stronger.

That being said does an assault against a man hurt less emotionally? Physically? Is it less of a crime according to the Criminal Code of Canada?

The answer is NO!

Men's emotional well being is traumatized.

The Criminal Code of Canada doesn't say assault is only a crime if it is committed against a woman it makes this very clear in its wording through out the law. You will find that what is described as a crime usually has these words in the opening line “ EVERYONE WHO ” and then the rest of the description of the crime follows.

Now why is it that in Hamilton here we have a rate of 95% abusers being male?

More reading to verify what I say look here:

Processes Explaining the Concealment and Distortion
of Evidence on Gender Symmetry in Partner Violence by Murray A. Straus

CURRENT CONTROVERSIES AND PREVALENCE
CONCERNING FEMALE OFFENDERS
OF INTIMATE PARTNER VIOLENCE
Why the Overwhehning Evidence on Partner
Physical Violel.1~e1>y"\Vo1ll.enHas Not Been
Perceived and Is Often Denied